Flights of Fancy — Pigeon keeping in the Old City
For pigeon fancying aficionados, rising costs do not dull their passion

Amr, a pigeon fancier, waves his flag in his pigeon coop in Sayeda Zeinab, with the Mohamed Ali Citadel in the background. - Courtesy: Ali Porteous
By
Ali Porteous

“It’s a hobby, but it’s also more than that,” Ahmed Shaloufa says, as we climb the final ladder to his pigeon coop in the working-class district of Sayeda Zeinab, “it’s a passion.”

Once inside the coop, the labyrinthine streets and megalith apartment blocks of the old city disappear from view. If you jump you can catch a glimpse of the Mohamed Ali Citadel. Otherwise, only a sea of pristine evening sky is visible, ornamented with a half moon and circling pigeons.

Pigeon fancying, or ghayt hamam in Arabic, are unusual but apt terms in both languages, with an etymological hint of seduction and obsession. “Pigeons …” Ahmed, 31, confesses, “they take over your mind.” 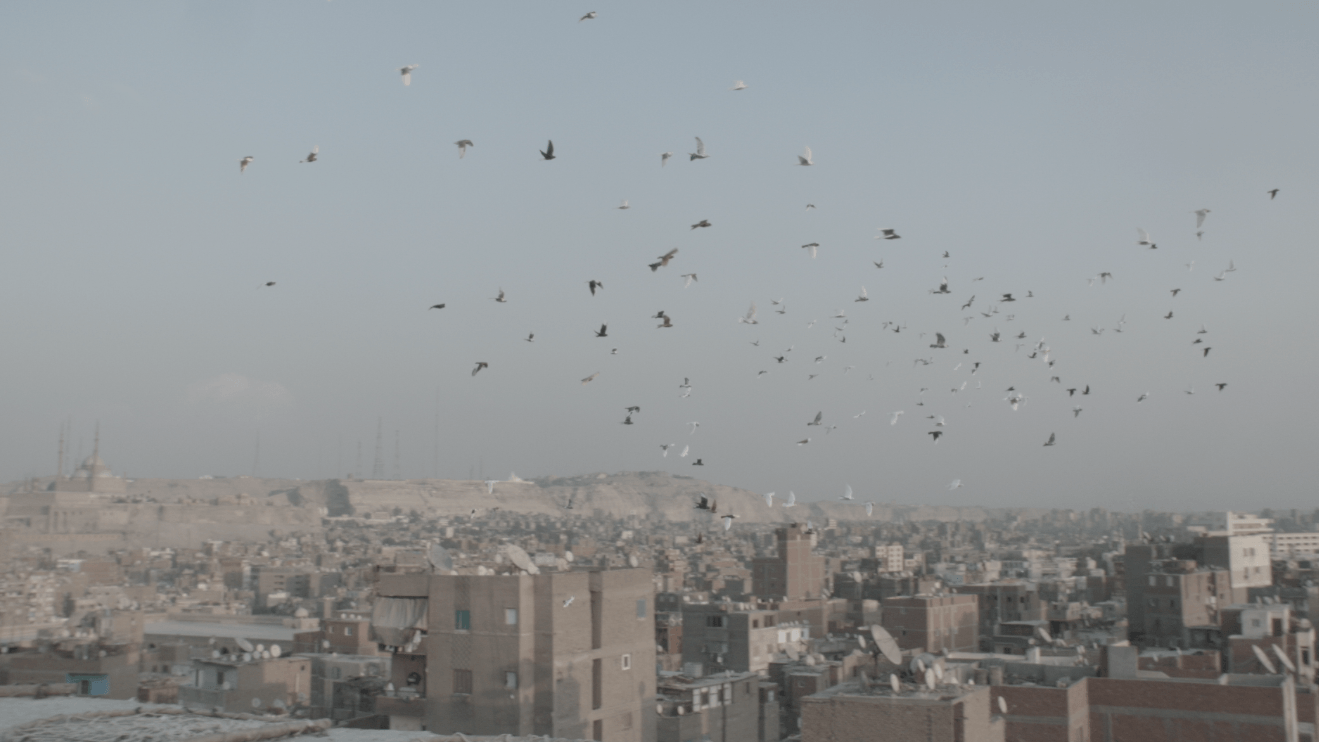 A brood of pigeons circle a coop in the Old City - Courtesy: Sonja Rendtorff

Cairo’s rooftops are peppered with innumerable dovecotes and pigeon coops. Many of them contain collections of pigeons to match those of famed sultans of old. One historian during the Mamluk period wrote that the Citadel itself once housed 1,900 feathered messengers. Ahmed owns upward of 350, and some fanciers have a count running into the thousands.

These coops have long ceased to be the playpens of the super rich, and, if anything, the opposite may well be the case. “The more shaabi or working-class an area,” Shehta Mohamed says, “the more pigeon coops you’ll find.”

Plucky small timers might start with a dozen or so pigeons crammed into an inconspicuous box on a friend’s roof. “Next year,” Shehta, one such aspirant, assures me, “I’m going to build a proper tower.”

The sort of tower he has in mind can reach as high as 15 meters, and is supported by spindly stilt-like structures. Some look like repurposed medieval siege towers. Others look more like tree houses long abandoned by their trees, painted in bold shades of green, yellow and blue, held in suspension by sheer force of habit.

Ahmed is skeptical of the over-reachers. “Any serious gust of wind,” he says pointing across the rooftops to one particularly vulnerable looking structure, “and it will come toppling down.” At three stories high, his coop feels quite stable. 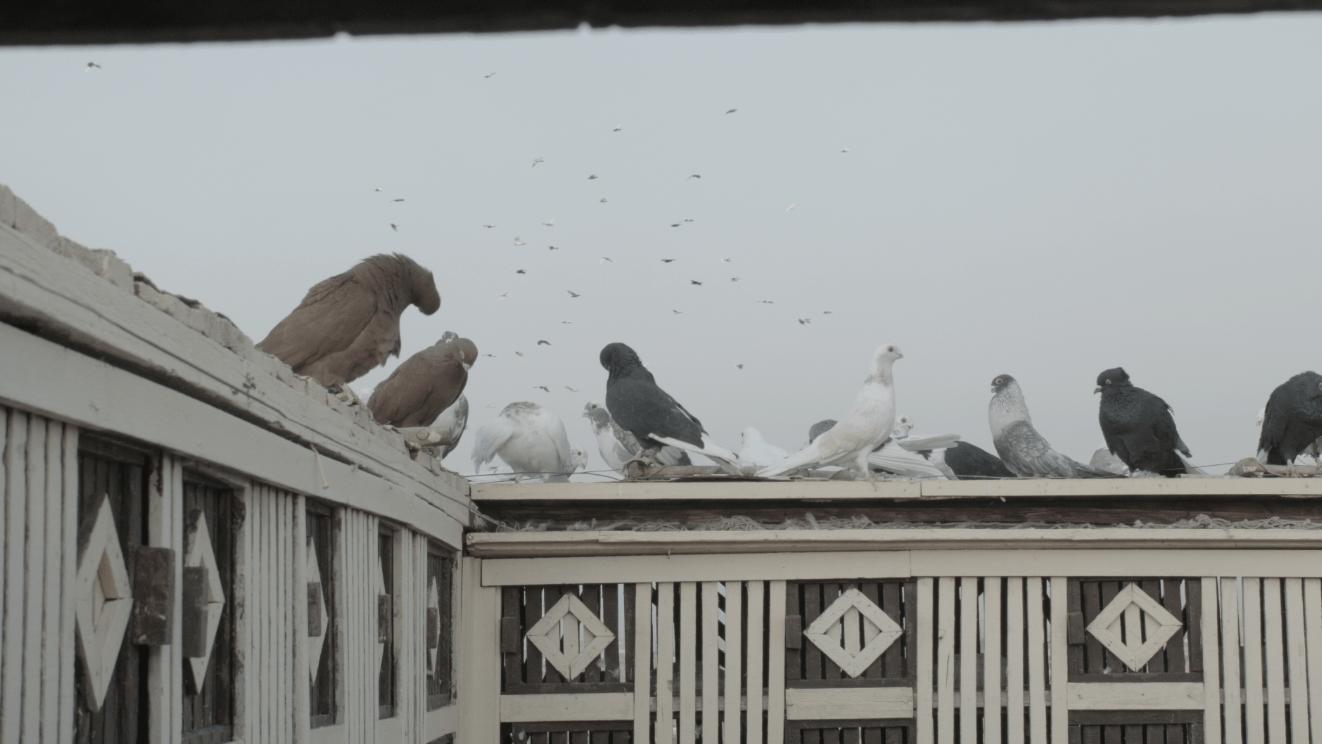 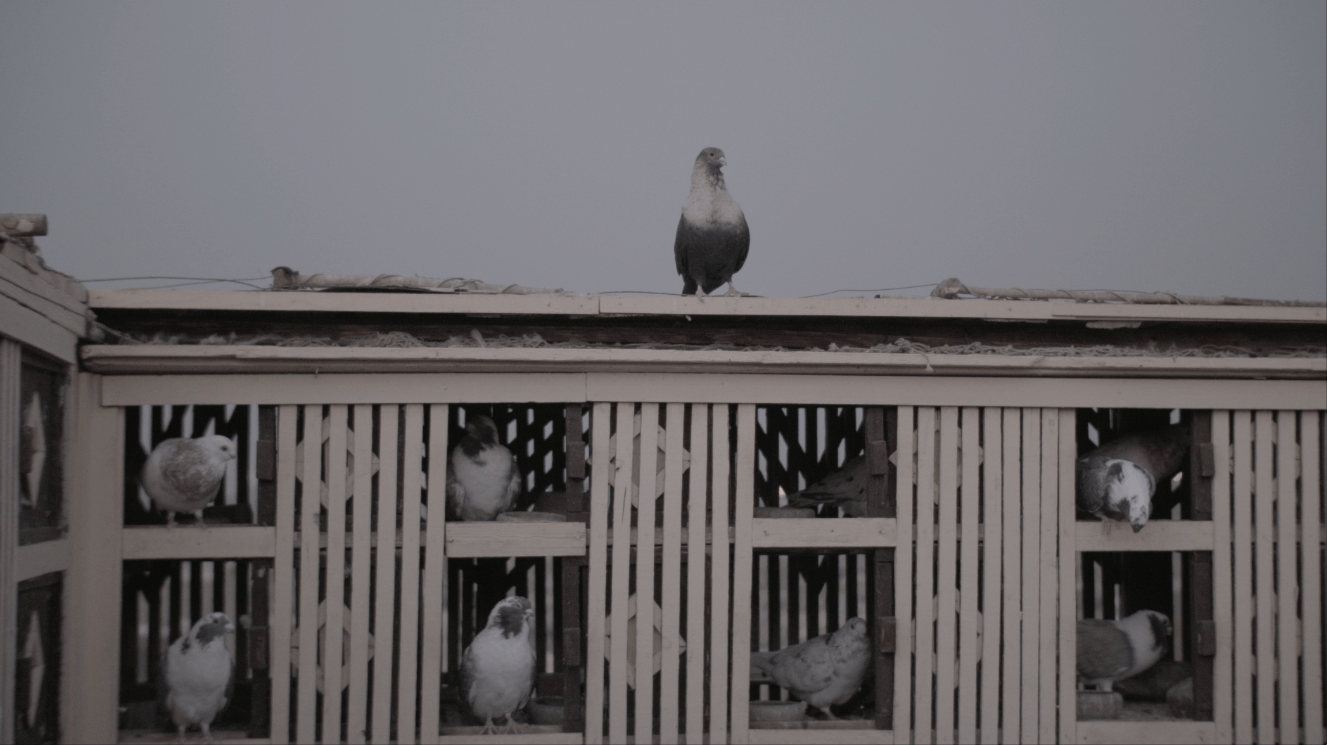 By nature a reserved man, Ahmed becomes invigorated when talking about the foolish habits and idiosyncratic methods of neighboring keepers.

He talks about one who beats his pigeons with a cane to make sure they return to the coop. Ahmed, like most fanciers, opts for the carrot rather than the stick. He describes in caring detail the more orthodox methods of training one’s pigeons to home. 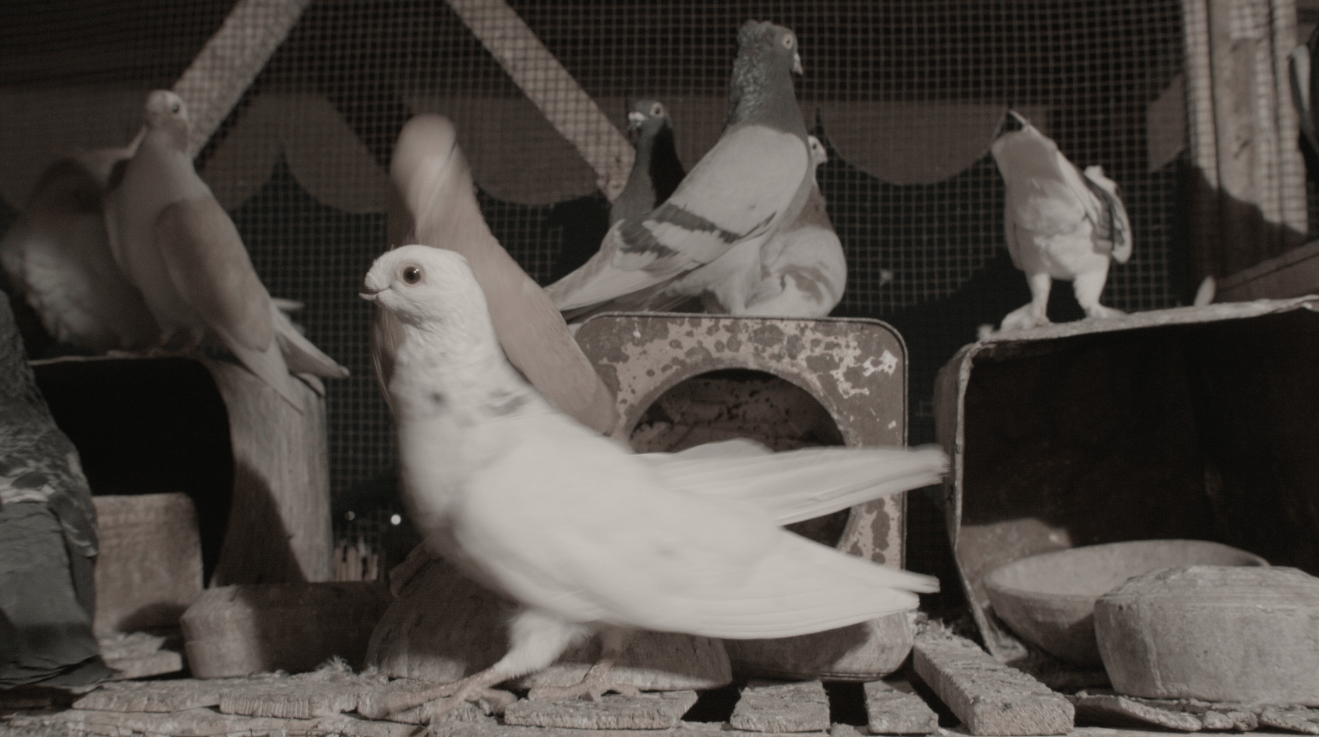 A group of pigeons wait to be fed after their evening flight - Courtesy: Sonja Rendtorff 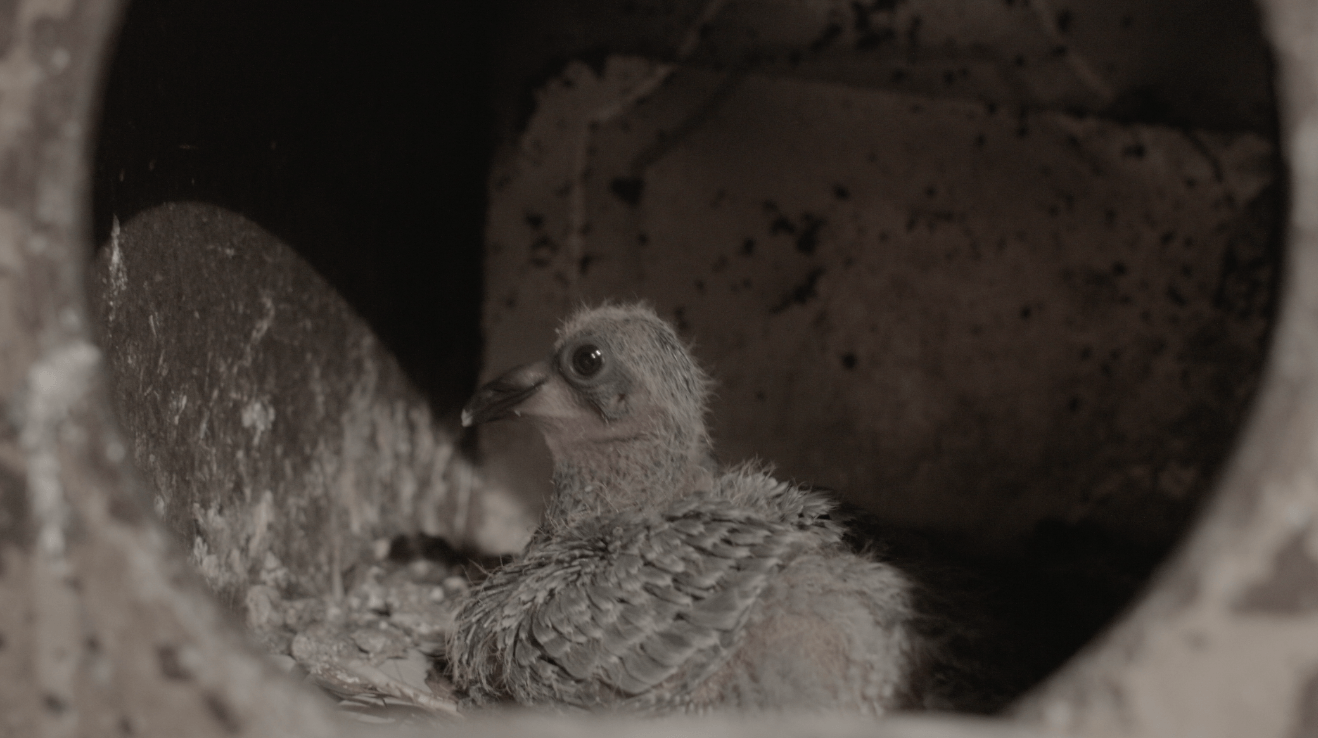 Groups of squabs, or baby pigeons, are kept in their own compartment for a month and half. They are then allowed to take their childhood steps in and atop the coop, familiarizing themselves with their new home. Soon they are encouraged to spread their wings and compass the coop in ever widening circles, until they are mature enough to join the rest of the brood.

For adult pigeons new to the coop, the method is more carnal, as they are locked in a booth with a member of the opposite sex. It is hoped that the pigeon will soon become attached to its new partner and, by extension, its new home.

Ahmed opens a booth, and two such lovebirds come fluttering out. They circle above us, a little apart from the rest of the group, cooing and flitting through the sky. Gazing up at the birds from Ahmed’s oasis in the sky, it’s all too easy to savor the romance of pigeon fancying.

The 11th century Persian mystic al-Ghazali saw pigeon fancying as a particularly alluring distraction from divine contemplation. “The man whose hobby is pigeons,” he laments with a hint of admiration, “[…] may stand all day in the hot sun without feeling any pain because of the pleasure he takes in his birds, and their movements, flights, and soaring in the sky.” 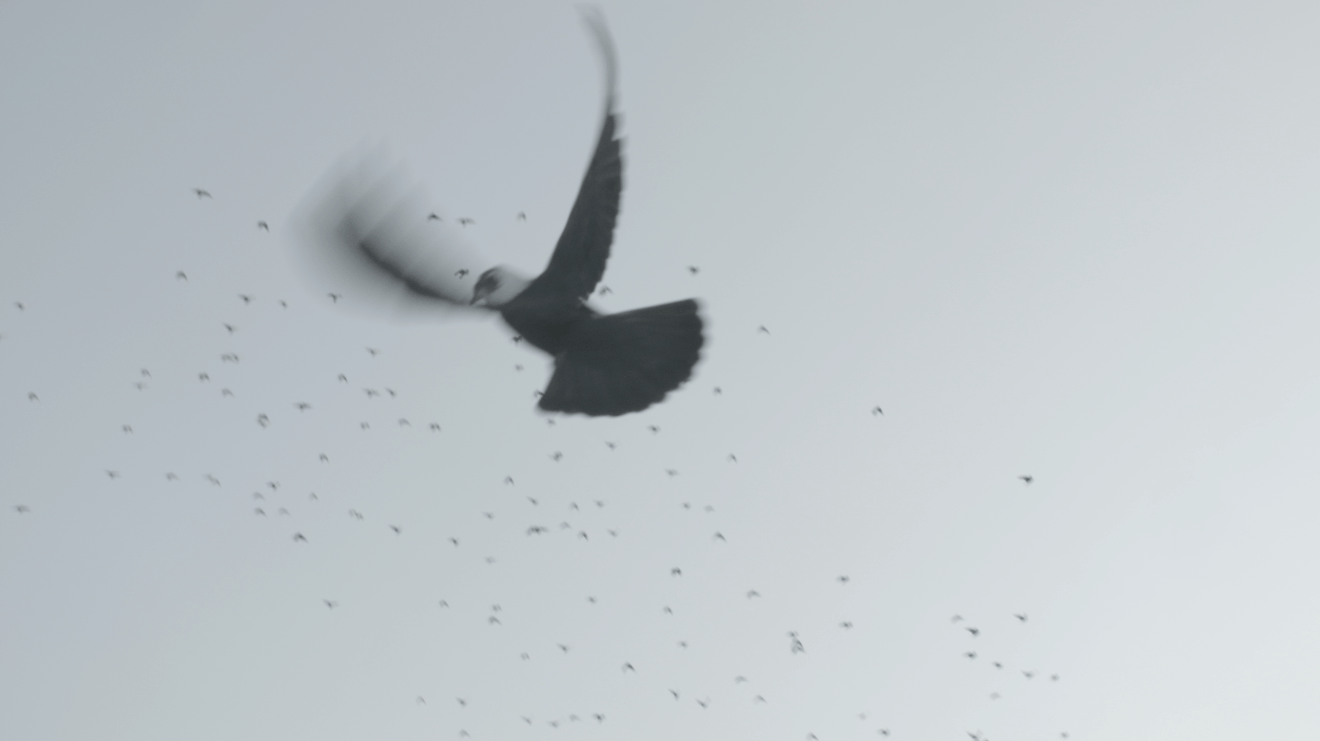 One pigeon spreads its wings a little apart from the rest of the brood - Courtesy: Sonja Rendtorff

A trip to Souk al-Hamam, the animal section of the Friday Market, is a noisy reminder of the other side of pigeon fancying. Every rung of the evolutionary ladder is represented: fish, tortoise and baby crocodile; snakes, lizards and chameleons; chicks, ducks and geese; owls, parakeets and fighting cocks; even three absolutely petrified chimps.

The market is an explosion of creation, dominated by two animals – human beings and pigeons. While the humans are overwhelmingly male, the pigeons tend to be sold in pairs, a male and a female. The market is abuzz with bartering and bargaining as potential buyers, from seven-year-old boys to 70-year-old men, handle the birds for inspection In a much-repeated manoeuvre, they hold the pigeons firmly by the body, fanning out their wings and splaying their claws.

As you make your way up the kilometer-long street, small-time sellers and hobbyists gradually make way for the more established traders. Later on, in an improvised cafe, I meet two such traders. They’re introduced to me as the “Doctor” Hussein al-Katayi, an older man on crutches, and his young “apprentice” Mostafa Yesha.

“There are over 150 varieties of pigeons,” Hussein says right away. Throughout our conversation, Mostafa interrupts now and then to offer in-depth descriptions of different pigeon breeds, each one complete with a character impersonation. There’s one that sticks its tongue out and has eyes the color of kohl, there’s one that puffs up like a balloon, there’s one that splays its neck feathers as it flies against the wind.

There are breeds that flip and breeds that do basic circus tricks, but the one criterion that pigeon fanciers prize above all is altitude. “The most expensive birds can fly up to the stars,” Hussein says. “The cheap ones hang to the house fronts.”

That your birds can fly high is a matter of pride and prestige. Fanciers whistle and wave a flag to encourage their pigeons to ascend. At the same time, this is important training for local competitions in which neighboring fanciers try and capture each other’s birds. 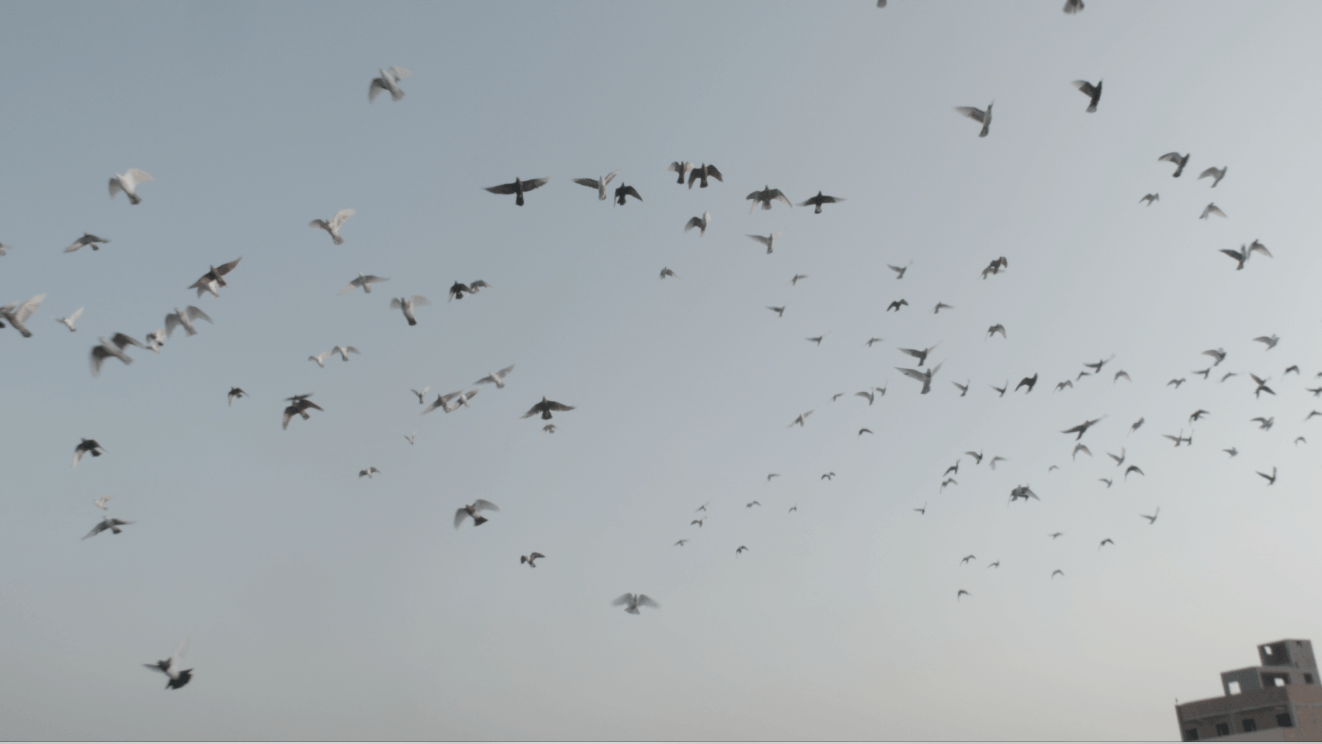 The brood of pigeons are encouraged to gain altitude - Courtesy: Sonja Rendtorff

First, the birds are allowed to fly together. Then, as the stronger group homes back to their coop, they may have drawn a couple of pigeons from the neighboring group to land with them. At this point, the fancier has a chance to trap them in a net. Ahmed shows me a captured pigeon from his sizable collection that he says could fetch LE500 at the market.

The most expensive birds can apparently sell for up to LE20,000. The “Doctor” Hussein even claims that “there are pigeon keepers who wouldn’t give away some of their birds if you offered them 50 grand.” 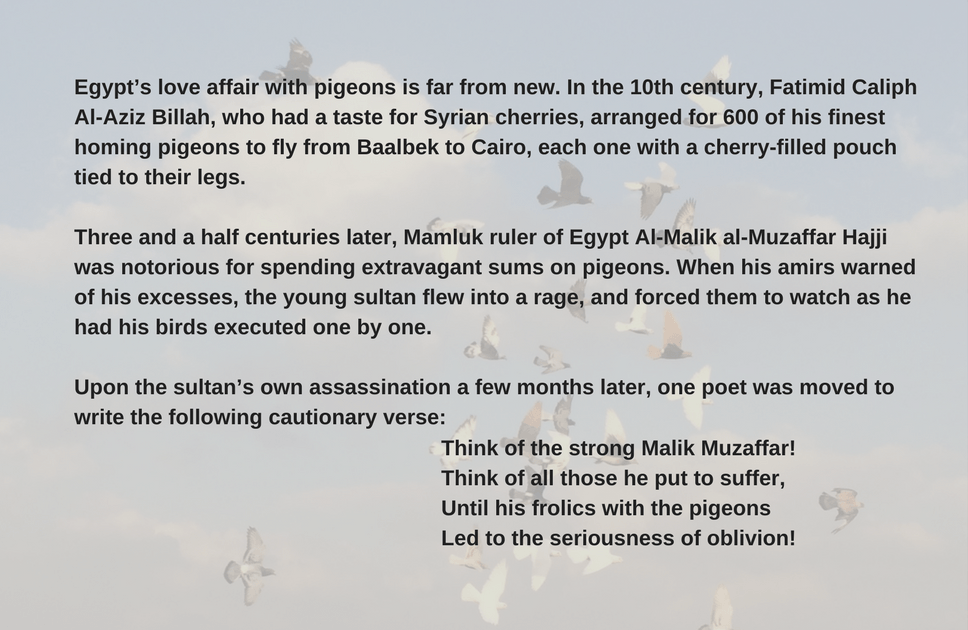 According to a popular proverb, “the man with piasters lying spare, buys pigeons and flies them in the air” (اللي معاه قرش محيره، يشتري حمام ويطيره) Today, more than ever, good pigeons are not cheap, and nor is taking care of them – fanciers need to account for constructing, equipping and maintaining the coop, as well as purchasing birdseed, medicine and vaccinations.

Though fanciers have fewer piasters lying spare, their commitment to buying pigeons and flying them in the air appears as strong as ever. “There’s no country in the world, in the world,” Hussein asserts, “that likes pigeons more than Egypt.”

For some young people, pigeons are an alternative education. Hussein nods at Mostafa, telling me that many teenagers attend pigeon markets instead of school: “It’s better than drugs, and the street, and a world of crime.”

Some of them, like Hussein and Mostafa, graduate to the business side of pigeon fancying. Breeding and trading, and its attendant demand for bird feed, bird medicine and pigeon paraphernalia, has created an impressive self-contained economy. Hussein says pigeons’ droppings can even be sold for use as agricultural fertilizer at a rate of LE10 for 15 kilos.

For most, pigeon fancying  is simply an absorbing pastime — in some cases, like Ahmed’s, an all-consuming one.

AD
You Might Have Missed
Where do old lesbians go to die?
What we talk about when we talk about trees
Carbon Colonies & A Green New Deal
Mugamma revisited: Reimagining the building and the square
AD
Ali Porteous
2 articles on Mada