Walking through the Antoniades Garden feels like being a guest inside Mahmoud Khaled’s art practice. After strolling in and admiring snails and trees we turn to our right and there it is, standing in the middle of a patch of grass. The statue of a figure leaning on a log.

I remember going to his exhibition Painter on a Study Trip in April last year and seeing a painting of that statue on the gallery wall. I had rolled my eyes. It brought me back to eight years earlier when some of us at Helwan University’s fine art faculty worked for our professors painting trompe l’oeil in people’s gold-encrusted villas. I avoided looking at that painting (Exercise) again, and looked instead at the small, clear photographs (Process), mounted in sets in thin wooden frames against another wall painted an institutional green. The photographs of a greenhouse caught my attention — I thought perhaps it was behind his house in a forest somewhere, or that it was his studio. I can only place it now, as Mahmoud Khaled shows us around the Antoniades Garden. 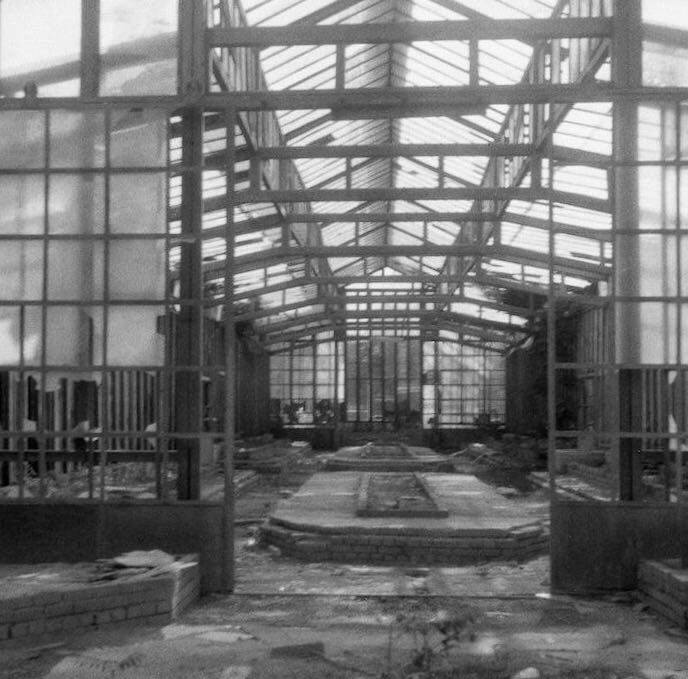 I assume the role of bad guest and make an intrusion into his art. I imagine myself walking and standing in the same places he stood, taking identical photographs with the same angles and lighting. I imagine that I like what he liked and am making the same aesthetic choices. What makes it a true intrusion is our shared experience of going to governmental art schools, experiencing similar absurdities and disappointments, knowing what the professors want to see, how to coax a good grade — me in Cairo, him in Alexandria. I remember clusters of students sitting together all drawing the same bust of Marie Antoinette in a prescribed academic style. At the end of the day we’d give our drawings to the professor, and I imagine them being thrown into a dark storage room filled with more piles of drawings of the same bust, gathering dust. 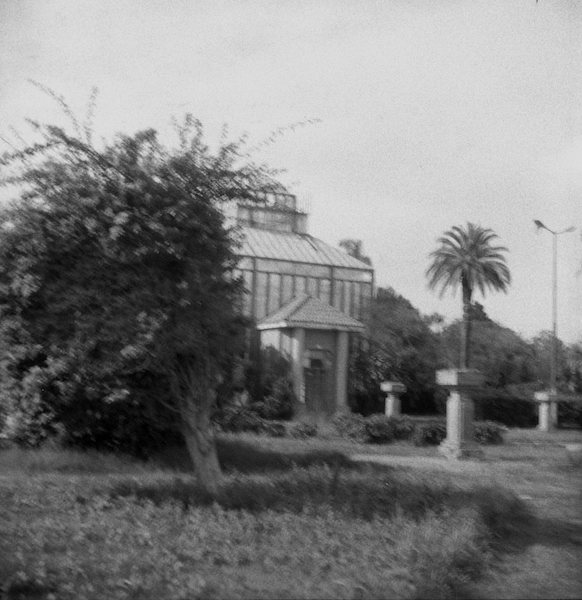 But as I walk through the garden I’m also seeing it for the first time. I have two types of knowledge of it, just like the twin reflex camera I’m holding has two lenses. One on top, where light bounces off a mirror for me to see the image, its aperture constantly open, letting light and information pass through. The other takes the picture, opening just to let in enough light to touch the film and burn the image on it, then closing again. I see the garden as a tourist does, as someone who can enjoy a space without strings attached (and because you can never see something the same way you saw it the first time, I’ll never be able go back to that garden and see it with that same happy ignorance again). But I also know it through Mahmoud Khaled’s work and through the stories he is telling us now, ones that I can relate to and ones that I can’t. His references are being burned into my mind. 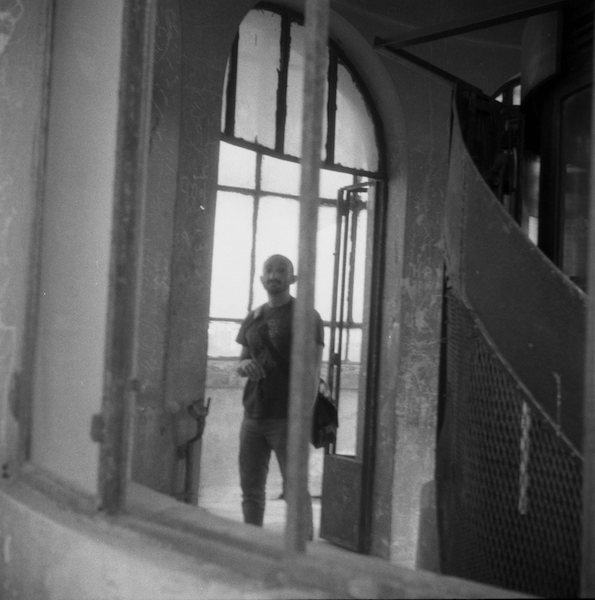 I parasitically entertain the idea that my photographs will be copies of the ones Mahmoud Khaled took for Painter on a Study Trip. What if another showing of it contained my photographs instead, or we switched images so neither of us could tell anymore whose was whose? I imagine a Frankenstein, or a mythical Greek being with three heads and goat legs. This idea of the switch is grotesque and I keep taking pictures, satisfied that there has been no resistance to my imagined vandalism. Mahmoud Khaled says there are things about Alexandria that Cairenes would never understand, turning to me to ask if I agree, and I nod. If I could go back I’d slightly change my answer: No we cannot, but we can fantasize, occupy, look for entry points, exercise futile effort.

We talk about a romantic Alexandria with patrons who build magical gardens and greenhouses, fountains dedicated to hard-working gentlemen. Through a text by Alaa Khaled we talk about another Alexandria that’s mad and performative, represented by Gamal al-Dawli, the head of the Etihad al-Sakandary football club fans, a first-rate artist, a man whose oeuvre was like an arrow shot into the sky in the hopes that it would kill an unjust god. He used green spray paint on walls to write his refusal of the political status quo, his love of his football team, more so his love for the team’s fans, and his lust for actor Laila Elwi, an exotic green-eyed blonde and subject of a million fantasies. 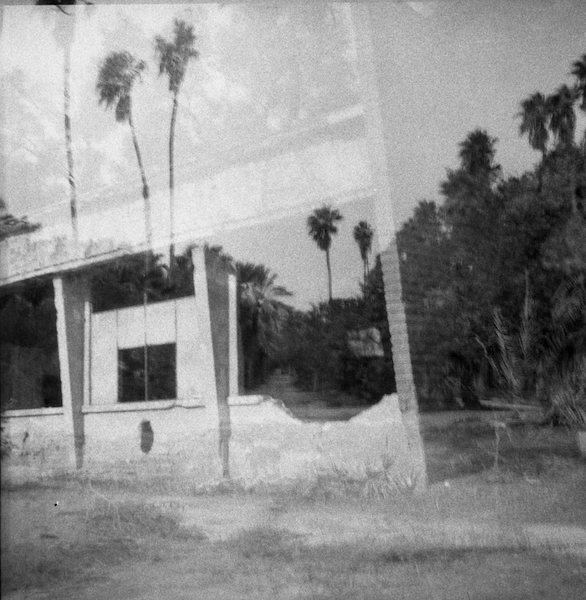 The Antoniades Garden is a hallucination, a forgotten garden filled with butterflies in which symbols of the past’s subconscious have fallen. Plants and weeds have overgrown around buildings representing different Egypts: one belonging to Mohamed Ali’s royal family, one belonging to former President Gamal Abdel Nasser and one belonging to the garden itself. It’s a place where princesses honeymoon and drug users gather at night. This morning we pretend to be shooting a film about tourism so that we can have a reason to be here that suits the state’s representatives. 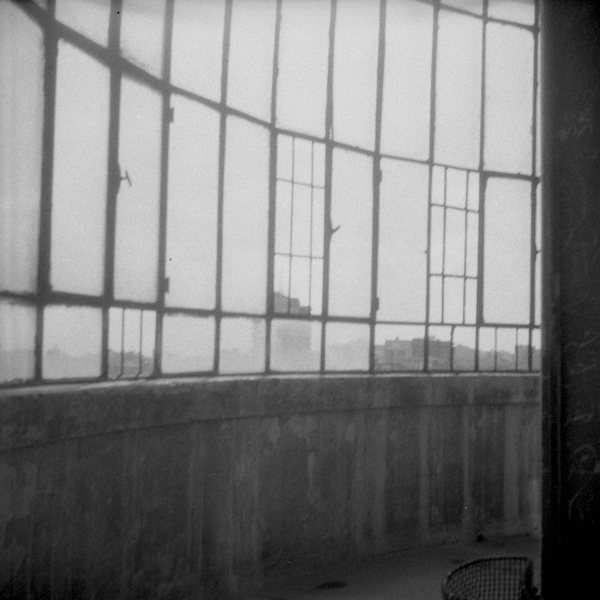 We move to the nearby Alexandria zoo. We head to a tower and take an elevator that looks like a time machine. The tower overlooks the zoo and gardens and a large part of Alexandria. We can hear a hum, like the sound just before the destruction of the world. It would be a great place to witness the apocalypse, watching the end among the ruins. Surrounded by captivity and the state’s expressions of power, which seem comic from up here. Everything could vanish like the elephant in the Haruki Murakami story being read aloud. The tower would keep standing alone, it would absorb all the absurdities it overlooks and project them outward into the nothingness. I think of Gamal al-Dawli running naked into a football stadium on live television.

AD
You Might Have Missed
‘Treachery isn’t a perspective’: Boycotting Israel in Lebanon
From prison: Trying to deceive pain
Becoming ‘legal’: On Mada Masr’s decision to apply for a license under the new media law
US leverage of UNRWA: Palestinians as refugees and their right to return
AD
Hanaa Safwat
5 articles on Mada

Topics
Related
Alexandria
Retrospection as an act of regaining a present
Alexandra Stock | On Mahmoud Khaled's tour of Alexandria and its beginnings in a Cyprus Pavilion at Venice.
Alexandria
Situations arise because of the weather
Ilka Eickhof | An account of day one of Postponed Dates on a Disappearing Coast, a happening in Alexandria in the context
colonialism
A critical journey: On Mahmoud Khaled’s ‘Painter on a Study Trip’
Ismail Fayed | Is the audience's relationship to fine arts is the same as their relationship to colonial cosmopolitanism?