Greetings to those who asked about me

In one of his letters from prison to Alia Mosallam and me, Alaa Abd El Fattah debunks all the words he hears from the outside about people sharing his imprisonment in their own way. He also warns against any consoling expressions like, “you will be stronger in there.” The truth is, he says, in his prison cell he gets bored, he is fatter by the day, he is actually imprisoned and he is alone in this condition.

It became harder to write him back letters or write about his imprisonment altogether after that. The act of writing got lost in the spectrum of responsibility and personal desire. At times, it was reduced to just offering a window into parts of what lies outside his cell: our lives, in their utter and at times brutal normalcies, between little pains and little joys.

Months after that letter, the Contemporary Image Collective has put on exhibit some works of art as part of its broader interest in the question of imprisonment. The exhibition not only clearly positions CIC as engaged with politics in general, but also with one of the most flagrant manifestations of state power, namely its claimed monopoly over punishment, bodily control and, ultimately, violence.

With this position comes the challenge of representing reality in art’s playing field. CIC’s curatorial team talks about an ambition to explore “the potential of artistic practices in finding specific and individual forms of articulation corresponding to the wide social and political amplitude of the subject.” In translating this potential, the exhibition, titled Greetings to Those who Asked about Me, offers seven works that span the documentary and the fictional and cross various forms and media.

Rafeeq Abdel Rahman’s Oral Narrations is a starting point, as it welcomes the viewer at the entrance, alongside a note delineating the show’s intellectual and artistic energy as well as its consciousness of the difficulties inherent in such an endeavor. Consisting of intense oral testimonies of prison experiences, Abdel Rahman’s work points to absence as one difficulty the exhibition has to grapple with. You have to access the sounds of people who have spent time in prison, in pre-trial and post-conviction detention, through a personal headphone set and through the disorientation of their being placed in an art show in the midst of other works that use videos and photos.

I managed to settle with some of the recordings in a moment away from their busy context and heard fragments of testimony from someone, probably a Sudanese detainee, describing how broken dignity is at the core of the experience of imprisonment. With effort, I extracted some fragments that transcend the documentary closure bestowed upon this form of telling. Could the difficulty of engaging with the recordings represent an attempt to inhabit the condition of imprisonment and the associated impossibility of access in a metaphoric way, I wondered? Or could there have been more effort to facilitate engagement by secluding the recordings from the rest of the show and crystallizing the absence that sound, as a form, reminds us of?

The potential of Oral Narrations may lie outside the scope of the show. Its author, a lawyer with a political family history, brings to the art world the presence of reality, while playing with the richness and promises of sound as a form of telling that makes space for imagination.

O Rinoceronte de Durer (2010) is perhaps more fortunate in its stance of taking a side in the show, as it is stationed at the furthest geographic end of the exhibition from its entry point. In a 40-minute film that sits at the intersection of documentary and fiction, day-clinic patients at the Miguel Bombarda Psychiatric Hospital in Lisbon act out scenes they have developed collaboratively with Javier Tellez, the film’s director. In these scenes, the patients imagine being incarcerated in the hospital’s real panopticon, which was used to hold people deemed mentally unwell until 2000. In acting in their assigned cells, the patients reproduce imagined lives of incarceration, with the film’s sensitive direction depicting the watching of time pass as an important experience of imprisonment. We see them re-enact activities that span systematic units of time, like skipping with a rope, sewing and smoking. A voiceover brings out texts that theorize the act of surveillance; gazing from above, as described by Jeremy Bentham, the social engineer behind the panopticon, and the short story The Burrow by Franz Kafka.

The various acts are tied with an ongoing interspersed shot of an embalmed rhinoceros being moved around the central hall of the hospital, reminiscent of a famous, detailed engraving of the animal by artist Albrecht Durer, which he is said to have never seen. A tribute to imagining, perhaps Durer’s rhinoceros is the film’s fantastical key to revisiting mental health and its associated institutional norms of inclusion and exclusion.

O Rinoceronte de Durer became the better sign-off for the show. Thus far, a documentary direction had dominated the exhibition, the kind of documentary that falls somewhere between emotionally engaging visitors and making them rethink imprisonment critically through new language, new imagination and new references. A tribute to imagination at the very heart of the panopticon, which can also be a metaphor for the broader condition of invisible control we live under, the film established a space for imagination that was missing in the exhibition, wrapped in poetic language. It is the kind of imagination born to the present and the real.

Between Oral Narrations and O Rinoceronte de Durer, there are other works, mostly taking a documentary direction. Emma Wolukau-Wanambwa’s Nice Time (2014) also highlights interesting ways of creating a work from an archive-based practice. An inviting setting presents documents from the UK National Archive showing attempts to erase the colonial traces of the Uganda Protectorate on the eve of its independence in the early 1960s. Some of these documents are placed on the walls of the room, while others are in bound books on a central table, around which you can sit, consult, and be part of the show. Again, Nice Time could have been a work on its own, with its own delineation of the imprisonment of history through archival erasures. Engulfing as it is, due to its own totality and the space it is granted in the show, Nice Time barely speaks to the other works, and you barely remember you are in a broader show once you try to exit it. 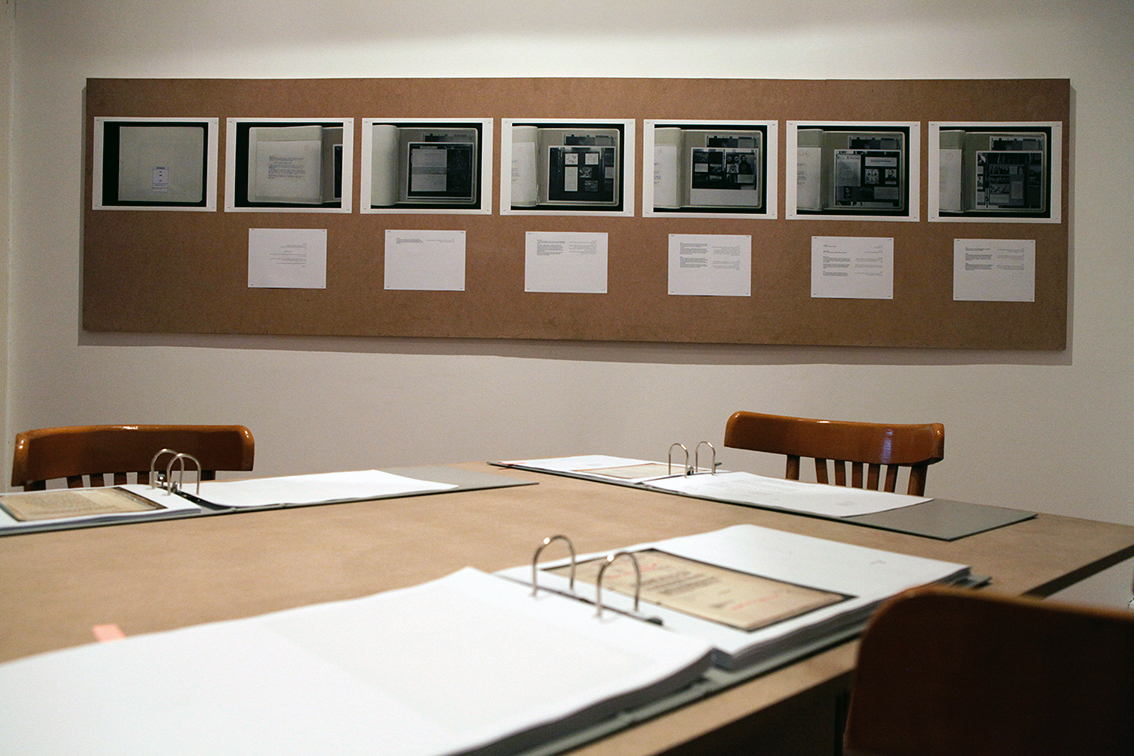 Another work is the late Hossam Ali’s Rafah Trilogy (1982), a documentary about the Sinai peninsula after Israeli forces withdrew in the early 1980s, and the subsequent post-conflict militarization of the liberated area that continues to live on its guard because it is a border zone. The work’s totality and depth is less perceptible in the context of the show than that of Nice Time or O Rinoceronte de Durer. There is some subtle experimentation with the form of film in the Rafah Trilogy, but it gets masked by the fact of Sinai’s heightened militarization today with the state’s ongoing fight against militant groups. This reduces the film to being a projection of the present, while barely working, as it should, to expand our thinking of imprisonment to geographies that become virtual panopticons, through a teasing out of its filmmaking subtleties. 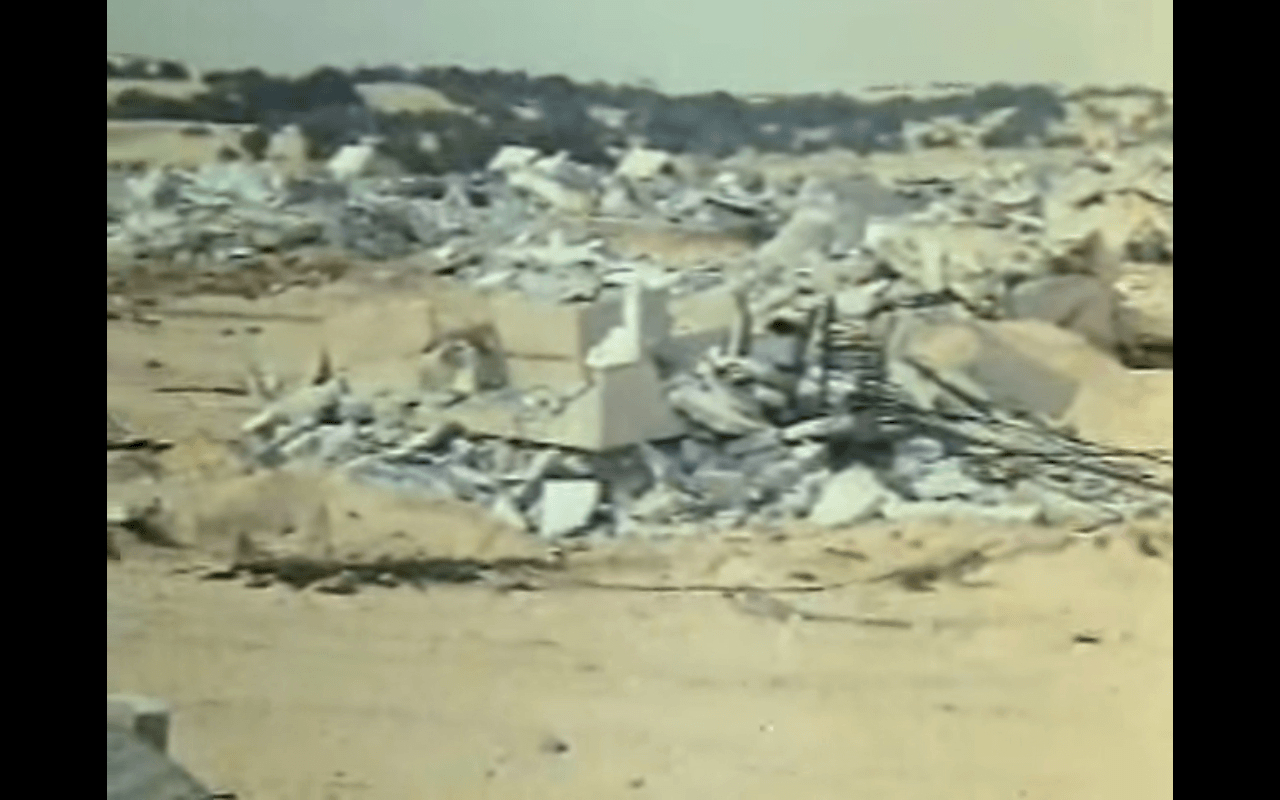 The show’s dominant soundscape comes from Bisan Abu Eisheh’s work, Love Speech. Beyond its being a two-channel video work about a man reading a letter from prison to an absent audience, its overriding sound acts like a systematic obstruction of the show. Perhaps Abu Eisheh’s intention is not far from creating this obstruction, as the letter-reading performance is reminiscent of void political rhetoric. But this leaves us with two questions: Does the function of obstruction override the need to intimately experience other works, such as Oral Narrations, O Rinoceronte de Durer, Rafah Trilogy and Nice Time? And as regards the work itself, what is the point behind creating parallels between prison letters, as sites of personal performance, and political rhetoric?

The exhibition is full of openings through the individuality of the works presented, each of which could perhaps be a show on its own. Despite this abundant richness, I left the entirety of the show with a certain disorientation and an irksome sense of absence — an absence of emotional engagement or critical rational engagement with the present possibilities of rethinking imprisonment.

Greetings to those who asked about me is a brave endeavor to take on the work of representing such a complex condition, of which the main subjects are chiefly absent. It is a show that reminds us of the broadness of these subjects, which can be history and space as well as people. The show transcends the usual solidarity tropes of talking, writing and thinking about imprisonment, the tropes Alaa Abd El Fattah has often reminded us of. But we are still left with the perilous task of presenting a sociopolitical reality and creating new modes of engagement with it, despite the persistent impossibility of imagining imprisonment.

Greetings to those who asked about me is open from noon to 9 pm, except Friday November 27, until December 5. 22 Abdel Khalek Tharwat Street, 4th floor, Cairo.

AD
You Might Have Missed
Carbon Colonies & A Green New Deal
What we talk about when we talk about trees
Mugamma revisited: Reimagining the building and the square
Where do old lesbians go to die?
AD
Lina Attalah
68 articles on Mada

Topics
Related
exhibition reviews
Birthmark as colonial inspiration: Shady Elnoshokaty at Gypsum
Jahd Khalil | About five minutes in, each piece of art began triggering thoughts about my own moles.
Alaa Abd El Fattah
A letter that won’t make it to prison
Alia Mossallam | I hope that the few paragraphs I will choose out of this letter make it to you, and I hope that all I
arts funding
Next to Here: Or rather over there
Ismail Fayed | Next to Here is emblematic of the relationship foreign cultural institutions have with contemporary art
Beirut in Cairo
‘A Guest Without a Host is a Ghost’
Malak Helmy | Out-arting the art with artful narrative does not, ultimately, do anything for the actual artwork in