Empty archives: What do we do with what we do not know

In the era of hypervisibility, with the omnipresence of high-definition images, the invisible is acquiring a new relevance in the dynamics of power that regulate the global knowledge economy.

Invisibility is both a prerogative of the powerful to operate in the shadows and escape accountability, and a curse of the oppressed, dispossessed and displaced, who are prevented from claiming any form of right. The law needs clear definitions, and those whose existence floats over borders are automatically excluded from the possibility of agency and protection.

But silence and invisibility can be turned into a tactic of resistance to the violence of war, state authority, bureaucracy and fascism. To consider how, we need to think about how the unseen, the unheard and the empty archive can enter historical narratives, linguistic categories and juridical terminologies. How can the invisible become a document and a proof of real, lived experience? What do we do about facts, events, places and people whose existence cannot be proven with tangible evidence?

Thus the American University in Cairo (AUC) Theory and Practice in the Humanities and Social Sciences Workshop organized an international conference on May 15 and 16 to highlight the necessity of considering absence in the collective construction of history, as opposed to evidence.

The conference, organized by Hakem el Rustom and Ananya Chakravarti, included a rich variety of international researchers and practitioners from film, literature, art, law and human rights. It was the result of a year-long multidisciplinary working group that also included seminars and public events.

A number of fascinating points arose from the dense two-day conference, with 32 speakers presenting their research and professional experiences in 20 lectures and four roundtable discussions organized by theme, in front of an unfortunately very small audience, that nevertheless engaged actively with the speakers in consistently long discussions.

Some highlights from the conference

Ann Stoler of New York’s New School opened the first day, which coincided with the 67th anniversary of the Nakba, by insisting on abandoning chronological approaches to history in favor of a “genealogy of the present.”

“There is no aftermath to imperialism,” she explained as an example. “The colonial legacy is real and the occupation is present every day in the lives of Palestinians.”

She believes the conceptual framework of colonial and postcolonial theory justifies a permanent status quo, which she referred to as “imperial duress” (the title of her forthcoming book).

“People are living multiple temporalities at the same time,” she said. “We need to find new ways to express the connectivity of past and present and reconfigure archival fields of relevance.”

Colonial archives, Stoler said, continue to feed the “Euro-American dissertation industry” that is incapable of producing a strong discursive alternative as it draws from the same sources over and over, reproducing the dominant narrative written by the oppressors.

Immaterial sources, fragments and unwelcome leftover images that do not fit how colonial archives were conceptualized are being systematically destroyed and are absent from official historical accounts that selectively interpret events.

An example is how Edward Said’s most important books, Orientalism and The Question of Palestine, written almost at the same time, failed to earn equal recognition in dominant academic discourse, which distinguishes between “Said the intellectual” and “Said the political.” “Orientalism was made safe for scholarship,” she said. “The question of Palestine was not.”

Similarly, the University of Kent’s Glenn Bowman spoke about how political and economic differences are neutralized into cultural differences to justify an arbitrary construction and consequent exclusion of the other, a subject whose intrinsic difference can be tolerated but not overcome.

Bowman showed a picture of elderly Sufi Muslims praying in an Orthodox church to point at the worldwide practice of sharing sites of worship, a form of interreligious solidarity rarely reported and thus considered an exception in the dominant discourse.

Despite its invisible, immaterial quality, discourse has material consequences on people and lands. The discourse of fear, often based on biased or false assumptions, justifies the concept of “pre-emptive war,” restricted freedom of movement, racial segregation and arbitrary detention.

“The colonial mentality conceals the motives behind the laws and policies that it enforces through the technology of walls and borders, land expropriation and racial segregation, from Israel to South Africa to former Yugoslavia,” Bowen said.

Francoise Verges of the College d’Etudes Mondiales talked about the social fabrication of “disposable people” through a legal, institutional and media discourse that actively distinguishes between people who matter and people who don’t.

Black people, Muslim people and migrants from the global south disappear not because of indifference, but because of the “politics of forgetfulness” enforced by global racial capitalism.

“The only possibility for migrants to exist is as illegal bodies, victims of human trafficking and of visa restriction policies, which are foundational measures to enforce the war on terror,” he said.

Pam Labib talked about how queer, homosexual and transexual identities are invisible to the state and most of society until they are publicly exposed in order to be shamed, marginalized and persecuted, as happened in Egypt in the 2005 Queen Boat incident, the 2013 “gay wedding” and the 2015 bath house scandal.

Chris Eades, director of St. Andrew’s refugees services, bitterly summarized the situation of migrants from Syria, Iraq, Sudan, Ethiopia and Eritrea entering Egypt and other northern African countries in transit to Europe and Israel to escape wars and persecution.

“There are estimates that claim 100,000 to 400,000 refugees are in Egypt at the moment. There is no domestic legislation to regulate their access and legal status. Migrants and asylum seekers in Egypt do not exist for the law; they are not entitled to healthcare, education, work permits,” Eades said.

They are condemned to a permanent precarity that is legitimized by EU governments’ agreements, which neglect the consequences of insufficient legislation in transit countries such as arbitrary and protracted detention and unlawful deportation. Migrants without the correct visas thus end up deported, detained or killed in attempts to cross borders.

This state of exception manifests itself even more violently in the case of Palestinians. According to a memorandum of understanding, they are not allowed to be registered with the UNHCR in Egypt. “Palestinians are beyond being refugees,” Eades said.

One criteria for refugees status is proof of torture. But how can historians, lawyers or psychiatrists prove trauma without visible scars on a body?

Another form of invisibility also emerged in the conference: That caused by information overload, as overexposure to images of suffering has a numbing effect.

As Reem Saad (an assistant professor of anthropology at AUC) put it: “We have witnessed in recent Egyptian history how thousands and thousands of dead bodies, official forensic reports of those deaths and injuries, and videos and images do not count as evidence.”

AbdelHalim AbdAllah, cofounder of Ana Mubasher — a social media platform for direct broadcasting born during the 2011 uprising — spoke about the power of social media in conveying the immateriality of lived experience in immediate proximity to events as they happen.

“Even if documenting one’s life has become an automatic daily practice worldwide and cannot be considered citizen journalism, an emotional, raw narration of a dramatic event has a specific relevance that depends entirely on the context in which it is shared,” said AbdAllah.

“A tweet published at a specific time can constitute a more powerful evidence than thousands of pictures of dead bodies,” Saad added.

Social media has the potential to challenge the monopoly of state and media in distributing the dominant narrative, AbdAllah argued, as ultimately the state cannot control the spread of ideas. But a huge amount of labor is required to distribute and categorize information from these sources and make them accessible for present and future historians.

Art and visualizing histories of erasure

Beyond the articulation of social grievances and past and present struggles for the affirmation of identity, and beyond denouncing the failure of academia and jurisprudence in carving a space of legitimacy for the subjects explored, no practical proposals emerged during the conference.

It did raise urgent philosophical questions around the need to conceptualize the invisible and immaterial, and showed how a multidisciplinary approach connecting theory and professional practices can enrich research.

But the absence of a vocabulary for events, communities and places characterized by fluidity, transience or in-betweeness prevents the conceptualization of a juridical status that legitimacy ultimately entails. A human being who is not a citizen or a refugee, for example, can automatically become a criminal, fugitive or terrorist until proven otherwise.

Invisible people and empty archives of unheard histories exist in theory, and become subjects of scholarly research that circulate in academic publications; but in practice, evidence is what counts in constructing dominant narratives, discourses, laws and policies with concrete impact on lives and territories.

Perhaps the most interesting aspect of the conference was the use of artworks to visualize histories of erasure. Literature, poetry, film and art have potential power to resist interpretation and form a resistance to the authority of linguistic categorization.

James Caron of the University of London School of Oriental and African Studies (SOAS) has studied Afghan women’s strategies to share collective experiences anonymously through improvised poetry. The poems tell of gruesome massacres in detail, but are illegible to the coercive forces of occupation because there are no reference to places, dates, recognizable names or ethnic markings. They serve an important social function by maintaining and passing on the collective memory of Afghanistan.

“Illegibility is a tactical archival practice useful for those who want to escape the control of authoritative powers, but bad for historians who don’t have much to hold on to,” Caron said.

“Incomplete archives and fragments represent valuable sources that need to be made available for students, artists and writers to engage with and produce different kinds of content,” he added.

This content could enter curricula and stimulate alternative forms of learning.

Dilip M. Menon used Rivane Neuenschwander’s Contingent, a time-lapse video work of ants eating a world map painted with honey, to explain how the world can be perceived as a collection of nation-states or a border zone, and a territory can be conceived as an object around which people move or as something created by people’s movements. 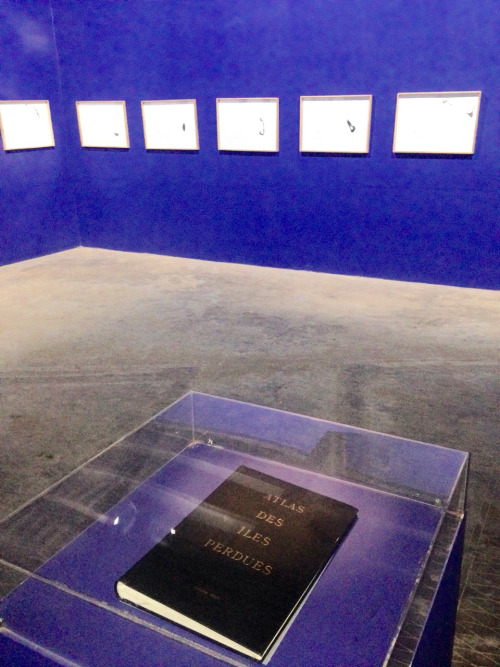 Dilib also showed Marie Valardi’s Atlas des Isles Perdus 2017 (2007), an archive for future historians that includes a collection of drawings of islands in the Pacific ocean that are going disappear due to ocean waters rising.

The presence of ruins, fragments, traces and artifacts that do not fit a coherent historical narrative constitute a precious source of doubt, for questioning what we know and keep interrogating history and the present.

“Imagination can lead you to the truth,” Ganesh Devy said in the closing address. And as Anne Stoler said: “In this messy, troubled space of ambiguity and colonial debris, genealogy takes into account the failed experiments, interrupted imaginations and fragments that did not even qualify as events because they never happened.”

AD
You Might Have Missed
‘Treachery isn’t a perspective’: Boycotting Israel in Lebanon
How you will be affected by the new cybercrime law: A guide
From prison: Trying to deceive pain
US leverage of UNRWA: Palestinians as refugees and their right to return
AD
Laura Cugusi
7 articles on Mada

Topics
Related
architecture
What will things look like after revolution and return?
Jenifer Evans | Jenifer Evans on a fascinating discussion at London's Tate Modern about Decolonizing Architecture Art
Ala Younis
Minute particles floating in the subconscious of the city
Laura Cugusi | On Haytham El Wardany's ‘Kayfa ta’ book: The tensions, social struggles and class inequalities that
conversations about the arts
How to measure the Mediterranean
Jenifer Evans | Nothing really dies in Cairo, it's always circulating.