Two takes on D-CAF’s The Library

While I was a student in school, the library was my favorite hangout during break-time. I would go with my two best friends, and we would each get lost in whatever adventure we found there. We would sit and read some paragraphs aloud, laugh and discuss books and stories. Sadly, I don’t think I’ve actually entered a library since then. The internet took over as my main method of research, and bookstores and second-hand book markets became my source of paperbacks.

This is what drove me to participate as a reader in Fanny de Chaillé‘s interactive theater piece The Library, hosted within the peforming arts program of this year’s Downtown Contemporary Arts Festival (D-CAF). The performance features 12 individuals from Egypt, who are not actors and have not been through a careful casting process, but are volunteers who share their stories. The piece was first developed in 2010 in Paris, and for it de Chaillé works with the volunteers to “become books and be consulted” by the public.

The performance features stories by these individuals, like my little story you read above, told in a one-on-one setting at the now-abandoned American University in Cairo’s library at the Downtown GrEEK Campus.

Upon entering the library, you are met with two librarians and a list of books and authors from which you can choose. You are then escorted to one of the tables scattered around the room, with two chairs facing each other. The librarian brings your “book,” which is actually a person, and asks you to take care of them and says you only have 20 minutes. 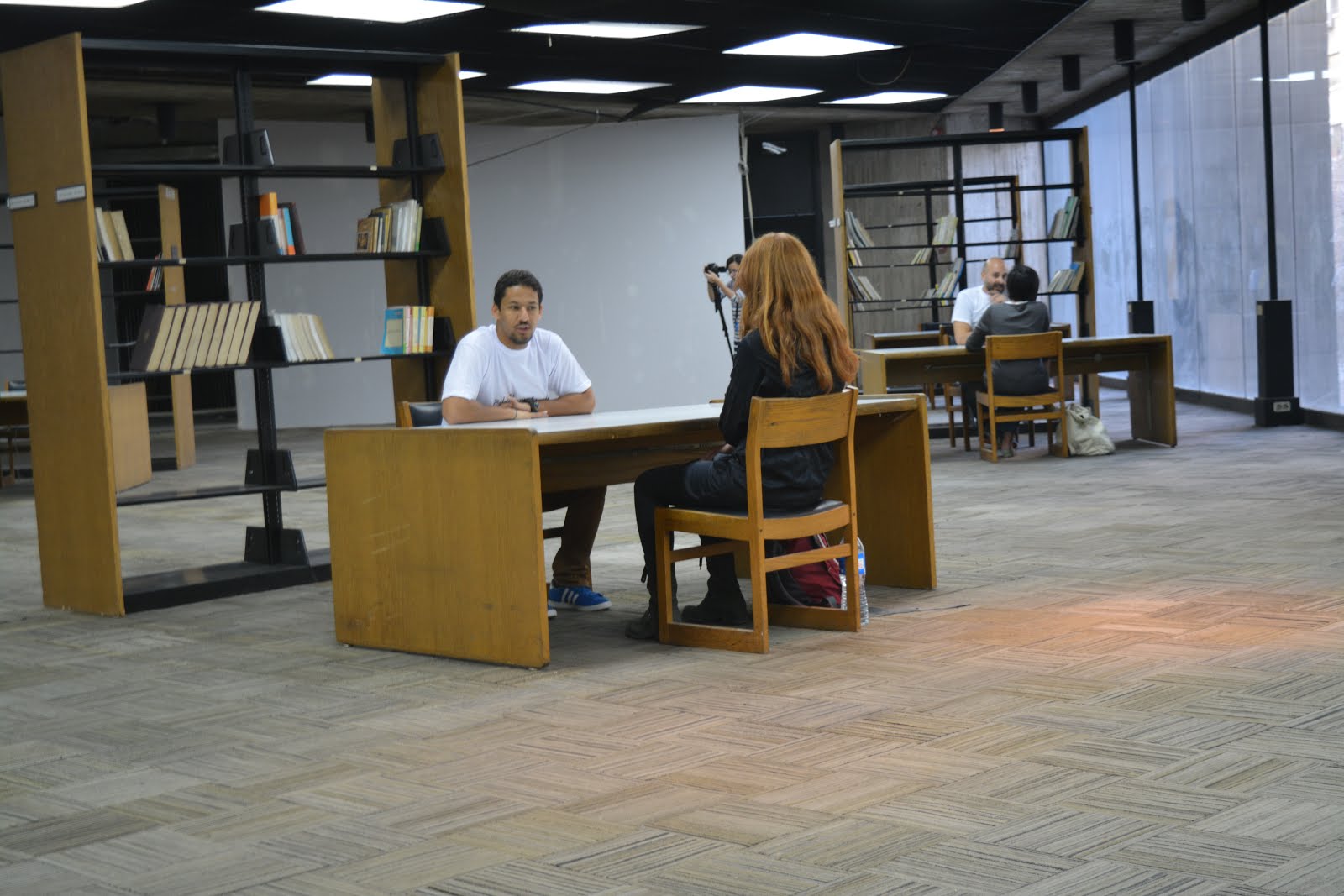 Initially I thought I would “read” only one book, but I ended up going through four (out of the total of 12). Each one was unique, and the level of engagement of both the storyteller and the story itself varied greatly.

For example, I picked up Happy, no … Free, yes by Ayman Sobhy, and it was extremely entertaining and engaging. The story is sad, mostly a comment on a purposeful loneliness, but Sobhy — who, from what I gather from the story, is in fact an actor and performer — tells it so well. He sings, reads poetry, tells the story and makes jokes. The story has no real ending, only a promise of continuation if I come back to The Library the next day.

While this interactive piece offers little beyond the experience of sitting in front of a stranger to hear their stories, that in itself has a certain charm. Both the audience and performer get a rare chance of intimacy, which is absent from most performance pieces. The audience can also engage with the book, ask questions and start discussions — as long as it stays within the 20-minute time span.

The other night I watched The Imitation Game, an overrated, award-winning 2014 film about mathematician and computer scientist Alan Turing, considered one of the key inventors of the computer, algorithms, and artificial intelligence.

There’s a scene with Turing and a cop in a British interrogation room. He’s being investigated for homosexuality, which was illegal in England at the time. But the conversation turns into a philosophical debate about whether machines can think.

We allow humans differences, says Turing — you like strawberries, I hate ice-skating, you cry at sad films, I’m allergic to pollen. What’s the point of preferences if not to say that our brains work differently? And if we can say that about one another, why can’t we say that of brains made of copper and steel?

At the end of the film Turing says, “So tell me detective, you get to judge. Am I a machine or a person? Am I war hero? Am I criminal?”

“I can’t judge you,” answers the cop.

A couple of days later, I felt this feeling attending The Library.

Twelve pairs of people were sitting at desks across from one another. In most cases, the storyteller was leaning into the table and the listener’s elbows were propped on it, immersed in the author’s tale. In a 20-minute segment, performed in Arabic, English or French, storyteller and listener embark on a short spoken-word journey that includes welcome exchanges, as though you’re being given a bedtime story. 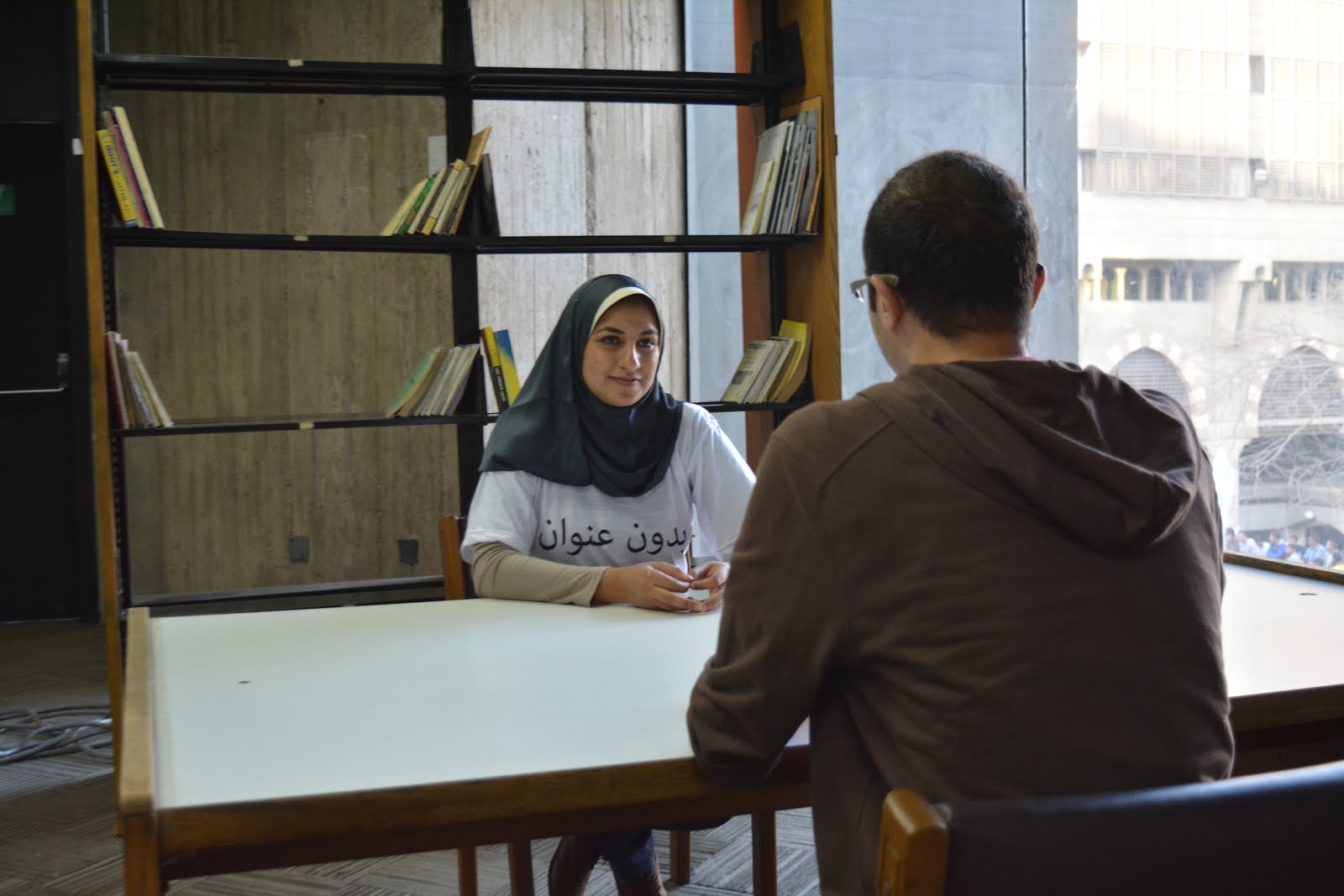 Not that they made me feel sleepy. More that one-on-one storytelling holds an intimacy that is rare in the consumption of narrative since the internet’s deep penetration into our societies. For many of us, stories are mainly consumed through a digital interface that lends itself to endless storytelling, be it in YouTube, podcasts, e-books, Facebook statuses or pirated movies.

The internet and computer have infiltrated almost every aspect of our lives. They have expanded our physical space, and indeed associated devices, mechanisms and interfaces have become a sort of spiritual event. It’s a phenomenon often called “techno-animism.” The side-effect is a disenchanted global society that would rather flip through Instagram at dinner instead of conversing. Techno-animism begins overriding our basic humanity. I see it all the time, the disintegration in our ability to listen to one another, face-to-face in the flesh, without interruption of an illuminating screen. Are we becoming robots? It’s like the cartoon my colleague Andeel drew last week, We need to talk.

For me, de Chaillé’s show is a direct challenge to this evolving detachment and the digitization of delivering narratives. It is a reminder of the unparalleled intimacy and humanity of listening to a story, told at that moment, only to you.

Although I only had time to catch two shows.

I have to admit that one was pretty forgettable and made me wish I could click to the next channel. But the other one, Without a Title, really struck a chord, partly because I could relate to it a lot, but also because it was told with such genuine and engaging delivery by its author, Salma Mohamed. The performance began with Salma taking a seat across from me with a clincher of an opener.

“First I’d like to talk about turning points in life,” she said. “They make one hell of a subject.”

She paused, waiting for my response.

After a couple of such exchanges, a device Salma used to entice me into her story, she began telling her tale of three major turning points in her life defined by her quest for absolute truths, followed by her discovery of matter’s relativity, and most importantly, Led Zeppelin. The story was structured in a way that was direct and fluid yet poetic. It never became indulgent or boring. I felt like I’d stumbled into an enjoyably philosophical conversation with a stranger.

“I think a turning point can either be external — like the reality of the world we’re living in forces itself upon us,” she said at one point. “Or it can be internal — it arises from deep within.”

“The fact of perspectives and that we could view matters in many ways could not fulfill me,” she confessed at another.

“As people we’re all different, and this difference gives meaning to the world,” she concluded near the end. “Everything changes, even nature. A tree is not always in full blossom.”

Before I left, Salma asked me, “So what do you think of my story?”

And like the cop in the movie, I couldn’t speak or judge. I could only listen, absorb, and truly exist within the telling of this tale.

The Library is taking place again today until 8 pm and tomorrow, April 6, from 4 to 8 pm at AUC’s Downtown GrEEK Campus.

AD
You Might Have Missed
‘Treachery isn’t a perspective’: Boycotting Israel in Lebanon
Industrial colonialism: Egypt, Germany and the maintenance of the modern world
From Tora: Harry Potter in an Egyptian prison
US leverage of UNRWA: Palestinians as refugees and their right to return
AD
Maha ElNabawi
88 articles on Mada
Rowan El Shimi
107 articles on Mada