اقرأها بالعربية
Dad, what is the color of God?

In Bassem Yousri’s installation RGB (1), the artist’s mind seems to explode onto the gallery walls in a fragmented display of painted drawings on canvases of varying sizes.

Stepping into downtown Cairo’s Mashrabia Gallery, I immediately thought of one of my favorite films, Being John Malkovich (1999). In the film, a puppeteer discovers a magic portal that leads into the consciousness of American movie star John Malkovich. Struggling for money, he opens a service that grants customers a 15-minute trip into Malkovich’s mind to experience his senses as he eats, reads and gets laid. Afterward, they are spit out onto the wild grass that lines a huge highway near the city, falling back into their existential crises, wanting more.

Splattered over walls painted black for the show, Yousri’s works parody imagined moments in the day-to-day life of young Cairenes. Made up of 125 black line drawings of people or animals with speech bubbles painted on white canvas, the exhibition seems to be a comical gateway into the head of the 33-year-old artist.

“The narrative is the result of a random arrangement of small instances or moments, taken out of their context, to create a non-linear storyboard of graphic novel installed in the gallery space,” says Yousri.

The exhibition’s title refers to the color model where red, green and blue light are added together in various ways to create the whole color spectrum. The concept is inherent in the work — while the pieces seem to be laid out arbitrarily, they form or fit into some sort of larger (incoherent) sequence. All the canvases have their sides painted in red, green or blue, which emphasizes the RGB theme while helping make the images pop a little. 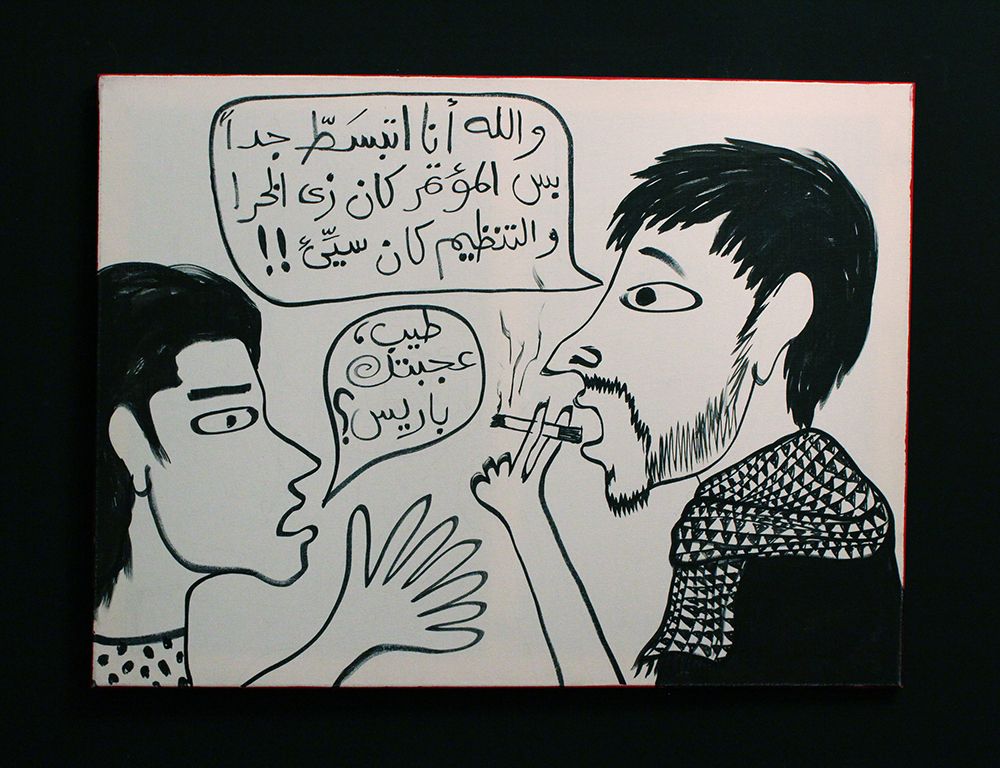 The images are quickly, fairly roughly painted and look a bit like political caricature, or illustrations by late Egyptian artist Mohieddeine al-Labbad. The figures are often distorted and have very long, thin arms, or far too many fingers.

The idea for the installation was born two years ago, says the artist, when he was creating a public installation in London in August 2012 called Factory of Illusions. Yousri continued creating new pieces since then, although the bulk of the painted drawings were constructed this summer.

Like Being John Malkovich, Yousri’s installation tackles love, identity, sex and gender in an often perverse form, provoking debate on stereotypes and taboos. The works are not arguments, but contentious representations and demonstrations of archetypes, and thus the human quest for identity.

In some paintings, Yousri mimics “small instances” of pseudo-intellectual banter that one associates with university campuses. A young man says to a woman, “Maybe if you read Edward Said’s Orientalism, you would realize that what I’m saying is right. Have you ever read Jacque Ranciere’s theory about the exchange of knowledge?” The woman answers, “Excuse me! I think I heard someone calling me over there.”

And other times, he’s even more blunt about what seems to be his own identity crisis, such as in a portrait-like drawing of a puzzled young man painting on a canvas with a speech bubble asking, “Who am I?”

There are also several glimpses into his mind on the matter of Islamists. One shows an angry-looking, bearded bald man with a prayer mark on his forehead talking with his tiny son. The son asks, “Dad! What is the color of God?” and the father replies, “Shut up, you son of a bitch” In another, what looks to be the same father and son are in a similar exchange: the boy asks, “Dad, what does God do for a living?” To which his father again violently screams, “Shut up, you son of a bitch!” 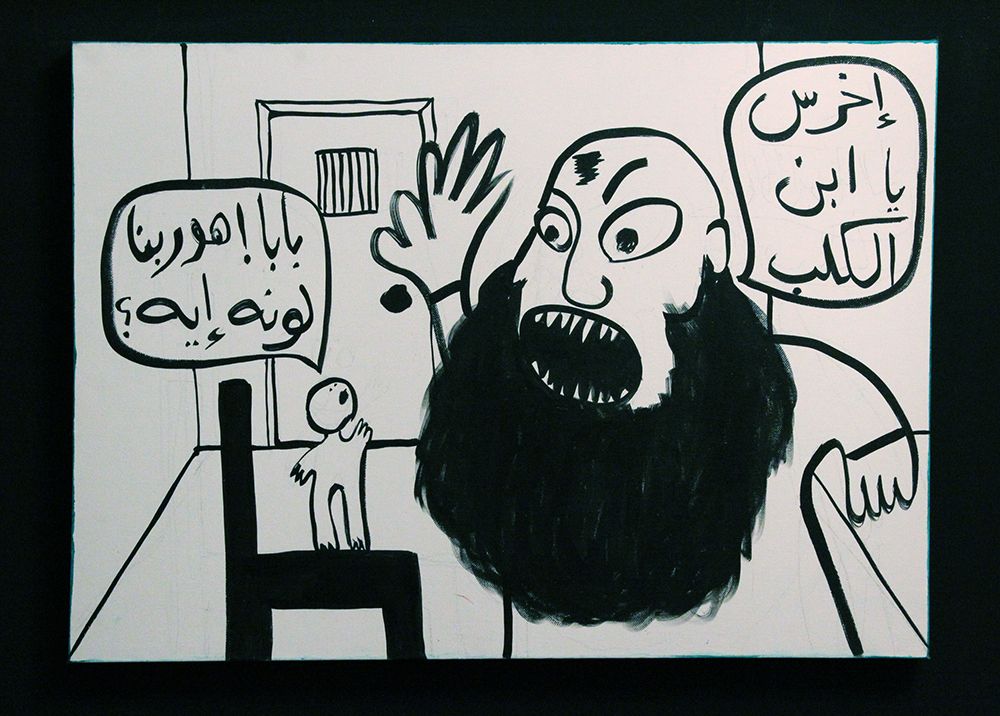 Yousri says his drawings of fully veiled women are not about making fun of them, but an attempt to portray plausible conversational exchanges. He often paints two fully veiled women discussing sex and love — one image shows two black-cloaked figures, one saying, “I suggest you forget about the whole thing totally!” The other responds, “But I really want to find true love!” In another, one woman says: “I don’t want to see your face around here again!” The second woman replies, “Ok, I’m leaving now but remember that I warned you! I am not responsible for what will happen next!”

I found these drawings to be shallow, though somewhat funny, representations of religious archetypes. They feel as though they are poking fun at conservative women, even if that wasn’t the intention. Also, it could have been more relevant to show works making fun of Islamist thinking last year when they were everywhere, but now they have been swept underground, it feels a bit late — possibly even careless.

In the past, Yousri has received criticism for his post-revolutionary works, most notably A Homage to the Egyptian Revolution (2011), where he created an installation of mini figurines of police and military forces in a US gallery. His work has been described as too literal and reactionary in terms of representation.

He seems to have a good sense of humor about the criticism, though. In RGB (1), several hilarious drawings directly address his critics. In one piece, a little figurine points to two dots on the canvas, saying, “And as you can see ladies and gentleman, at the top right corner there are two small dots!” In another, a young man and woman stand in front of a bunch of drawings on canvas, and the man says, “I think the pieces have good concepts, but the drawing style is really terrible!”

But often the drawings are too dependent on their speech bubbles, which serve to clarify the images rather than compliment them, and this can feel didactic. The leftover pencil lines from the artist’s initial sketches, which run alongside the black paint on most of the canvases, also undermine the confident look of the quickly-painted black lines, and bring up the question of why make cartoon-like drawings into paintings on canvases and hang them in a gallery. In reproductions, the pencil marks do not show, and stylistically the works may function better in the forthcoming book that will have the same title. 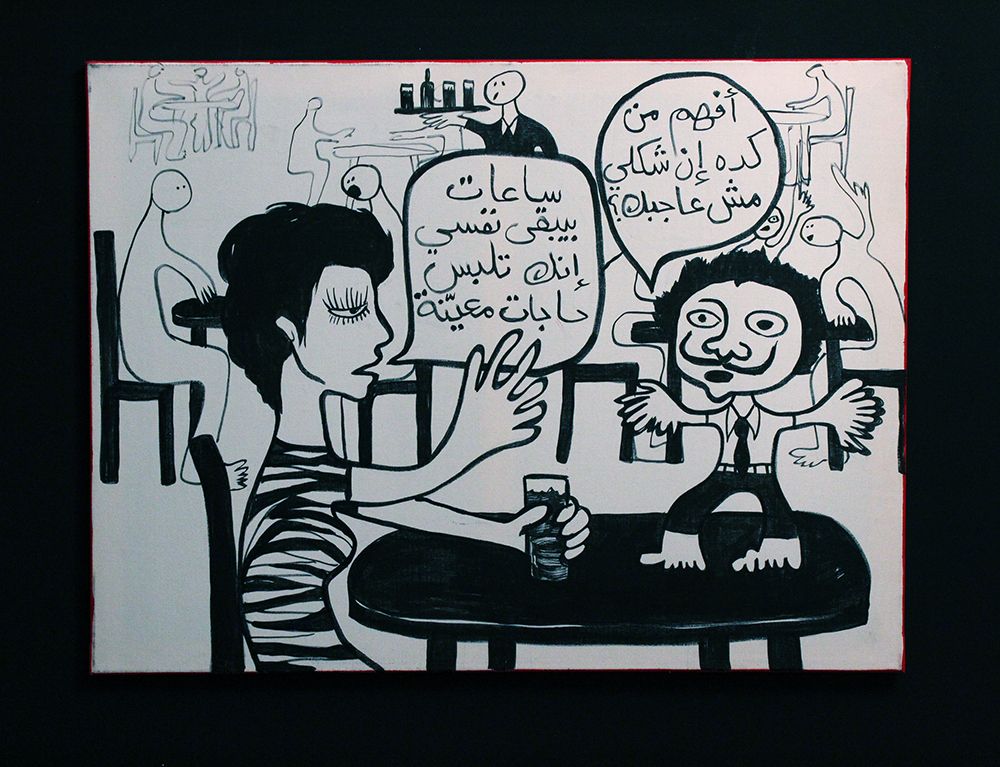 That said, there are many engaging pieces. While I was less keen on those based in scatological humor, I had many favorites. One is a drawing of two elephants. “I want to travel far away and start a new life in a place where no one knows who I am. I’m fed up with this place!” says one elephant. “I feel you,” replies the other.

Another image that particularly tickled me is of a man with a grossly oversized head saying, “I know you don’t understand how my head got this huge all of a sudden, but I’m afraid I don’t have time to explain right now.”

Despite the flaws, Yousri exposes his thoughts on the world and those living in it with unflinching openness, no matter how awkwardly. RGB (1) works as a portal into his mind, regardless of how well or poorly he represents certain archetypes. In the end, after about 15 or 30 minutes of viewing, Yousri spits you back onto Champollion Street and the grim realities of your own life, leaving you wanting more.

RGB (1) is showing at Mashrabiya Gallery until October 13.

AD
You Might Have Missed
Carbon Colonies & A Green New Deal
What we talk about when we talk about trees
Mugamma revisited: Reimagining the building and the square
Where do old lesbians go to die?
AD
Maha ElNabawi
89 articles on Mada

Topics
Related
Ahmed al-Saqqa
The meaningful butt-kick
Andeel | There is nothing impressive about making a comedy that is funny, argues Andeel.
Andeel
Profile of Andeel: Cartoonist, autodidact, funny man
Jahd Khalil | A friend once told me that laughter is a very basic expression of understanding. This makes sense to
exhibition reviews
Pretty, pretty, pretty, pretty, pretty girls
Ania Szremski | Though the word lazy isn’t really allowed in the art criticism lexicon anymore, frankly that’s what
artist profiles
The guy behind Contemporary Art
Mai Elwakil | Type “contemporary art is” in a Google search, and the top three suggestions one gets are: “bullshit,”