Tensions flared among residents of the informal neighborhood of Dar al-Salam on Monday, after a scheduled demolition turned fatal.

The area continues to experience unrest following last month’s decision by the City Council to demolish a row of recently-constructed buildings along the neighborhood’s outskirts, with a series of controlled explosions overseen by Central Security Forces, as well as members of the Armed Forces’ engineering authority.

The buildings, 22 in total, occupy a 36-acre stretch of agricultural land directly behind the Constitutional Court, and across a narrow street from the Maadi Military hospital.

Monday’s escalation occurred when the ruins of a demolished building further collapsed, killing one child, according to official reports. Footage of the residents converging on the scene is marked by screams lamenting the loss of the victims. Residents place the death toll anywhere between four to 20 children.

Authorities arrived shortly afterwards and, confronted with the residents’ anger, dispersed the scene by firing shots in the air and, eventually, teargas canisters. A number of residents responded by throwing rocks at Central Security Forces. Residents also started fires as an attempt to overwhelm the smell of teargas. 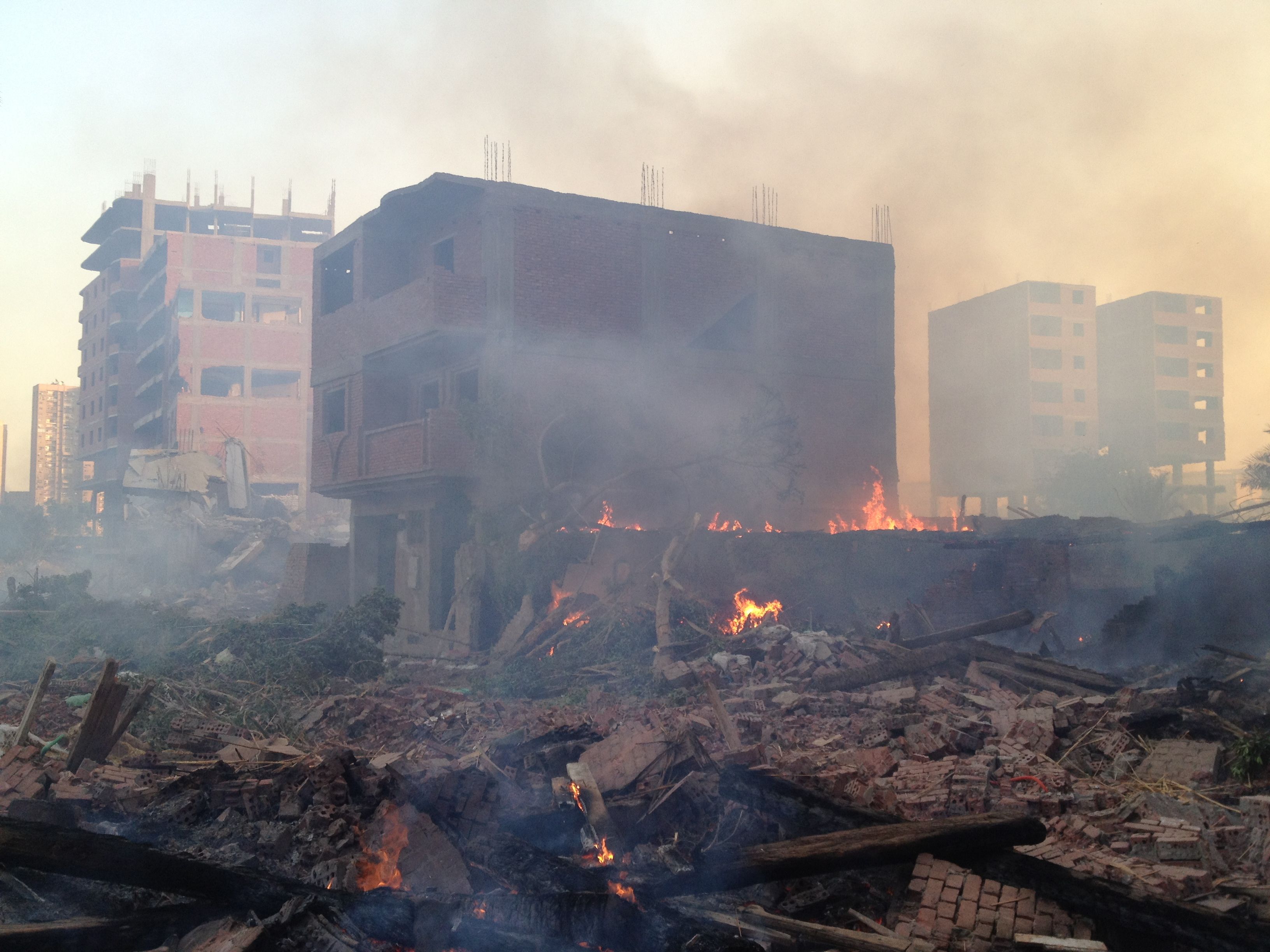 Mada Masr arrived on the scene shortly after the authorities had withdrawn to find residents frantically digging through the rubble for more bodies, guided, according to their yelling, by the smell of blood rising from the dirt. A bundled corpse lay at the corner of the field of wreckage, surrounded by a crowd. A second body, residents stated, had just been carried away by family members; a statement Mada was unable to confirm.

“This is criminal,” explained Ahmed Mabrouk, a 28-year-old computer engineer who lives one dirt path deeper into Dar al-Salam from the demolition area. “These people have the paperwork to prove ownership of their lands.”

“And even if they didn’t,” he claims, “there are more decent ways to treat citizens. You can’t just blow up their houses and put entire families on the street. Legally or not, some people have been living here for over 50 years.”

Ashraf Abu Selim, who claims to own the land on which the ruins of his building now sit, holds up a thin stack of papers as he explains, “I have all the documentation that proves this land is mine. This is a court order, issued in 2006. I tried to show it to the officers [supervising the demolition] and they told me they were just enforcing a decision that had already been taken, and that papers didn’t mean anything to them.”

He points out details within the rubble, stating, “You can see the tiling. You can see the faucets, and the broken pipes. Some of these apartments were furnished.”

The demolition crew and authorities, he claimed, never notified him of any plans to tear down his building. “I only found out on the day they showed up,” the 54-year-old says.

While unable to confirm an actual second death on Monday, Aya Hassan, a 34-year-old mother from the neighborhood states, “Between the people attempting to salvage what they can from the ruins and children playing, injuries happen all the time, many of them serious.”

The buildings, she explains, are blown up using dynamite, and the wreckage left in an unstable condition until bulldozers eventually raze it. 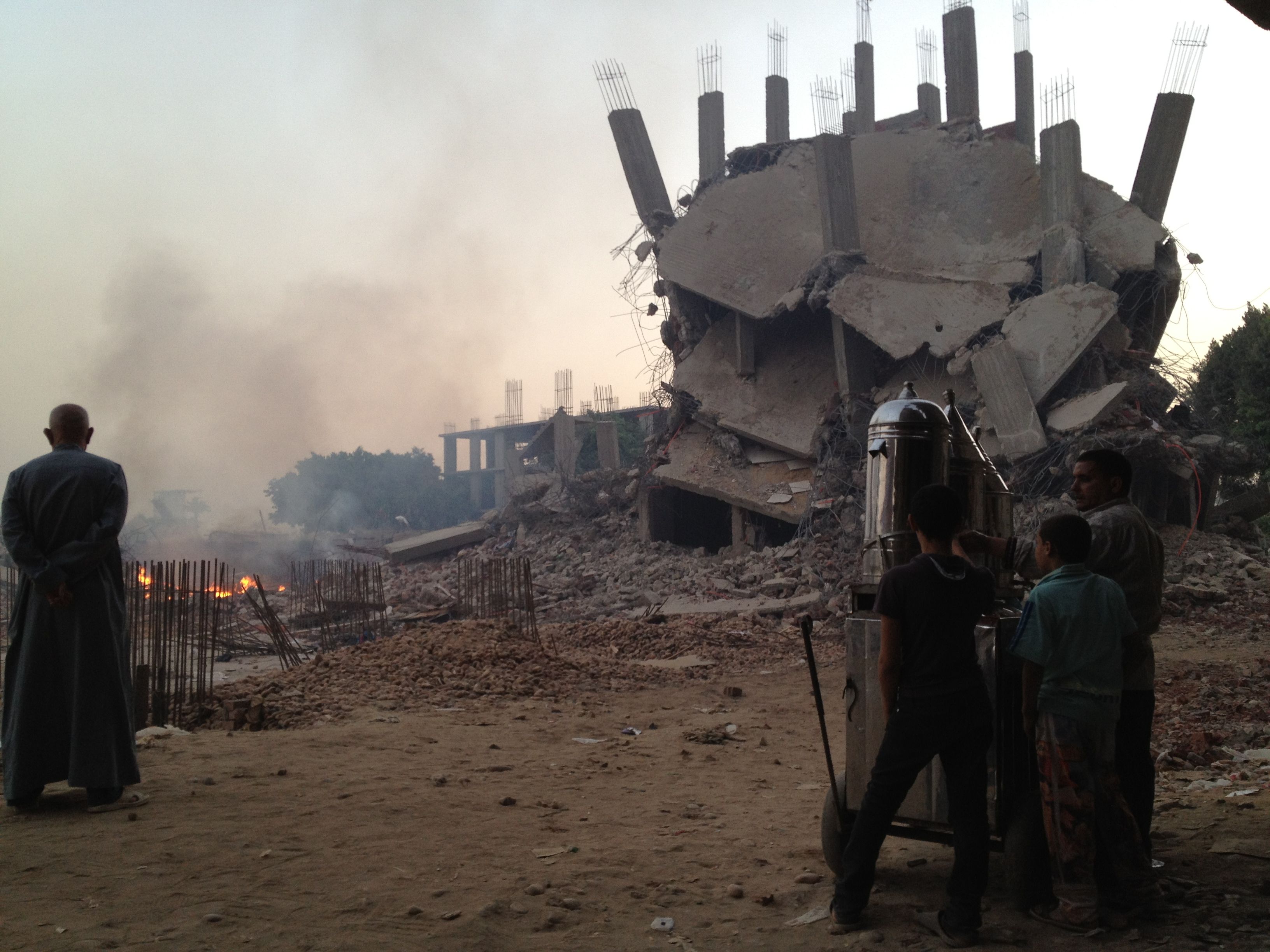 “What kind of government clears a heavily populated neighborhood with dynamite and brute force?” she asks, adding that, given the strength of the explosions and the largely improvised nature of its infrastructure, “it’s a miracle Dar al-Salam hasn’t entirely collapsed.”

Cairo Governor Galal Moustafa Said had said that dynamite was being used only to demolish tall buildings that bulldozers couldn’t.

In a statement made to media on Monday evening, head of the Dar al-Salam municipality Mohamed al-Tawil announced that the day’s incidents had resulted in the death of one child, who was delivered by authorities to the parents “in pristine condition.”

Tawil also asserted that security forces would only treat residents of the neighborhood “with the utmost respect and courtesy.”

“We will not approach those who are in their homes,” he said. “And evictions will only be enforced using decency and respect.”

Following the statement, angered Dar al-Salam residents held a heated debate between those moving to immediately tear down the barricades around the land, and those suggesting a march to the district attorney the following morning. The debate quickly devolved into an argument and broke up with no clear decision taken.

Shortly after the City Council’s announcement last month, thick cement barricades appeared along the perimeter of the plot, bearing the title of the Maadi Investment Company — a subsidiary of the Ministry of Investment. Demolitions proceeded soon after, despite the complaints of numerous farmers and building-owners who claimed ownership of the land and who had, in some cases, recently built and sold property on it. Inevitably, the month that followed has been marred with clashes surrounding the contested area.

Meanwhile, demolitions of the remaining buildings continue as scheduled.

You can view dramatic footage obtained from bystanders here.

AD
You Might Have Missed
Where do old lesbians go to die?
Carbon Colonies & A Green New Deal
What we talk about when we talk about trees
Mugamma revisited: Reimagining the building and the square
AD
Ali Abdel Mohsen
9 articles on Mada